Compassion Above All Else

As an Outward Bound alum, a founding NYC Outward Bound Schools board member and two-time board chair, it is a joy and a pleasure to celebrate my dear friend Richard Stopol, who has been awarded the 2018 Kurt Hahn Award. 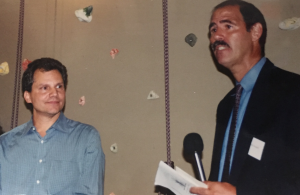 Outward Bound has been a part of my life since I was a teenager, when I went on my first course in North Carolina. It changed my life. Years later in 1986, as a board member of the North Carolina Outward Bound Schools, I met a group of students from South Bronx High School who were on a 30-day literacy course. They, too, were having a powerful experience, but I realized that, once home, the profundity of their course would recede, lost in the noise of a Bronx adolescence. In order to keep what they had learned alive, someone needed to bring the experience back to them, meeting them where they were.

Inspired, I started to think about how to establish an Outward Bound center in New York City. I got connected to the Fund for the City of New York, which in turn introduced me to Richard, who had been assigned by the Fund to help us turn our dream into reality.

It did not take long for me and the others to realize Richard was just who we needed: Richard shared Outward Bound founder Kurt Hahn’s deep belief that every individual is capable of accomplishing great things if challenged and supported appropriately. And, like Hahn, Richard placed compassion above all else.

As we set out to launch this new venture, it was Richard’s vision, wisdom, and patience that enabled us to establish the strong foundation from which to grow into an organization that is transforming schools and changing lives throughout NYC’s most underserved communities. We tapped him to lead the organization in 1987, and he has been surpassing our expectations ever since.

Under Richard’s leadership, NYC Outward Bound Schools has served over 100,000 students in NYC, has established a highly successful network of public schools rooted in Outward Bound’s education approach, and serves over 70 other NYC public schools through our Adventure and Team Building and Select Strategies programs. And despite serving a much higher-needs student populations, our results consistently outpace the city’s.

And while all of the above can be seen as true acts of persistence, compassion, and courage, there is one example of Richard’s “Kurt-Hahnian” leadership that stands out to me: in 2000, I hosted an Outward Bound trip to the Dolomites in Italy. Despite being the longest serving Outward Bound CEO, Richard is not a climber, but I managed to convince him to join us.

During our first and hardest day, climbing at 9,000 feet, we ran out of water first, and daylight second. We were all exhausted, nearly defeated, and feeling miserable. Richard — the non-climber — masterfully took up the leadership role, finding ways to keep spirits high and make folks laugh, urging us along and inspiring us to make it our destination, which we finally reached by 2am. Without his leadership, what was one of the hardest physical and emotional challenges we had ever faced, might not have been so powerfully meaningful.

Richard’s blend of leadership, collaboration, integrity, and compassion is quintessentially Outward Bound. I’m lucky to count him among my friends, and thrilled to celebrate his deserved honor.

A Taste of College »
« Not a Typical Journey
Back to top