The first year of our Crew Mentors pilot program, which trains NYC Outward Bound Schools alumni to support their younger peers just starting college in NYC, is wrapping up. The pilot included two “Crews” of students, one led by alumna Laiba, a student at John Jay College, and another led by Jharol, a junior at Queens College. Read about the early months of the program here. 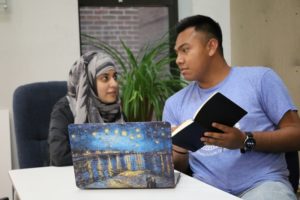 Throughout the year Jharol and Laiba helped their freshman mentees – most of whom are the first in their family to attend college – navigate the challenges they faced in their first year of college through text messages, over the phone, and in person. In all, Laiba and Jharol supported 48 college freshmen.

In one particular case, Jharol helped a mentee who had two separate financial aid “holds” that were preventing him from registering for classes; the student felt ready to give up. Jharol met with the student, helped him make phone calls, and eventually went with him to two different campus offices to resolve paperwork issues. With Jharol’s help, the student was eventually able to register for classes before the deadline. “I could not have done this without Jharol,” said the student.

With the first school year of the program over, we’re excited to double the Crew Mentors program! Three new outstanding alumni have been recruited and hired to lead three new Crews of student mentees, along with veteran Laiba.

Nelly is a graduate of WHEELS and will support students at CUNY’s Borough of Manhattan Community College (BMCC), where she is a student.

Bielka attends Kingsborough Community College, and will support graduates from her alma mater Kurt Hahn who are attending various colleges throughout the city.

Diana is a graduate of Brooklyn Collaborative and is leading a Crew from Brooklyn College where she is a student.

Training is underway and Crew Mentors have already made connections with many of their new mentees. With Nelly, Bielka, Diana, and Laiba on board, the program aims to support over 100 students beginning college this fall.

Crew Mentors is the newest addition to the suite of supports we provide to students as part of our To & Through College program.

Read about the first semester of Crew Mentors and learn Laiba and Jharol’s greatest takeaways.