Finding My Own Sense of Character

Excerpted from a speech written by Elise Lubin, an 8th grader at a NYC Outward Bound School in Brooklyn, for our 2019 gala 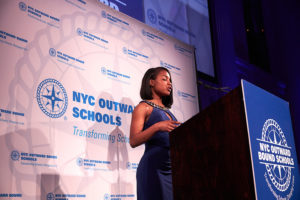 So far tonight, you’ve heard about how demanding and engaging learning, and community help students like Jasmin, Jamie, and me.  Well, I want to talk to you tonight about the importance of character development, so I’m going to tell you all a little bit about how I’ve developed my character at Launch. Stick with me, because before I get into all the deep down stuff –  the highs and lows, the relationships and the growth – I want to tell you about Ms. Forbin, epidemiology, the black plague, and my 7th-grade expedition about disrupting gun violence in my community, Crown Heights. It will all connect – trust me on this.

Last year, in the last 2 months of 7th grade, I found out that we would be studying the impact of gun violence on our community in all my classes. My lovely science teacher, Ms. Forbin, taught me about looking at everyday problems like a scientist, in particular, studying epidemiology and learning how to approach something that is curable with a strategy. We began by learning about the Black Plague and the foundation it created for epidemiologists. It was the first outbreak resolved with strategy.

Next, Ms. Forbin compared the Black Plague and gun violence.  I thought that these sounded like two different topics that could never be compared, but I was wrong.  As we learned, people figured out that they could prevent the Black Plague by surrounding themselves in the smoke of fires. This was a short term cure, but it was a start to something bigger – people coming together to create solutions to some of the worst problems they face as a society. Gun violence, as we all know, is also one of the worst problems we face.

When Ms. Forbin put it that way, I really started to get the hang of it. Our class was visited by David Gaskin, one of the organizers of Save Our Streets, Crown Heights, a community organization that helps disrupt gun violence.

He explained that gun violence is similar to a disease. It breaks out in communities sometimes like a rash. It has negative effects on the health and well-being of the community where it has spread – just like a disease. And, in the same way that the Black Plague was curable, gun violence can be treated when it is studied and disrupted.

We created posters and brochures, wrote speeches and poems, choreographed dances, and practiced chants to get our message out! The day of the walkout was motivating. All the 7th and 8th graders at our school and our teachers came together with our community to do something about a real problem we face.

So, back to character. I did so much learning in the expedition about science, history, my community and how to be an activist. But the most important learning I did was my own reflection on my choices and my future. Ms. Forbin knew that I wasn’t always making the best choices, so she set up a time for me to talk with Mr. David to help me think about my actions and decisions. Through reflection, I realized that I was getting into situations that were not helping disrupt violence in my community. I was adding to it. When I realized that, I knew I had to make a plan – just like an epidemiologist would.

In order to start making better decisions I made a diagram to show the “old Elise” and the “new Elise.” It boosted my confidence and motivated me to do better and get my grades up. I also made a vision board to remind myself that I have some big goals and high standards that are precious to me. It also made me aware of how my emotional reactions could impact my future. When the old Elise had a problem with a peer, she would sometimes get into an argument or an altercation. But the new Elise, the one who knew about using strategies to disrupt problems, knew how to walk away or talk to an adult I’m close with.

So, if you’re wondering how my school helped support me in developing and growing my character, I hope I’ve painted a clear picture. What started out as the Black Plague and turned into a walkout to disrupt gun violence also helped me change as an individual.

Unlearning Bad Habits »
« My Senior Expedition
Back to top