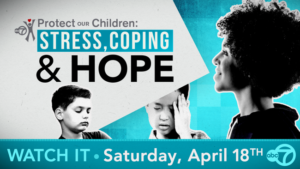 On Saturday, April 18, WABC-TV aired a special entitled, “Protect our Children: Stress, Coping & Hope” at 7 PM, EDT (Also re-run Sun. 4/19 at 5:30am). The program was hosted by Eyewitness News Anchor, Shirleen Allicot, and acknowledged the fact that, as the statistics on the COVID-19 pandemic continue to reach record highs, we hope this public health emergency will soon end, with parents and children adapting to new ways of coping with what were the normal stresses of life.

The special highlighted the effort of students and staff at MAELS, a NYC Outward Bound middle school on Staten Island, to combat social isolation at school through their work in Crew and with nonprofit partner, Beyond Differences. A press release distributed by WABC read:

At a time when we’re being told to keep a social distance due to COVID-19, it is ironic that many educators and students have been working for some time now on eliminating just that for very different reasons. A middle school in Staten Island confronts the fact that many children cope with social isolation and they’re working on ways to help them feel like they’re not alone. With teens helping their school mates feel like they’re not all alone, it reveals what we all hope for — that we want to come out of these dark times together and not feeling isolated.

This special was the 23rd in a series from WABC-TV’s “Protect Our Children” campaign that originated in 1998. The campaign included informational safety messages, a web site and campaign that continues to broadcast the pictures of missing children in every Eyewitness News Program. The previous Specials have received six Emmy Awards, six “Gracie” Awards from the American Women in Radio-TV-Film (AWRT) and Awards from the National Center for Missing and Exploited Children, (NCMEC).

Watch the full segment here (scroll down the fourth video).