Make a Mark. Make a Difference.

The power of group collaboration has always amazed me. People of various backgrounds coming together all trying to achieve a single goal showed me that people can do anything they put their minds to. During my time at Gaynor McCown, I saw that idea in action.

I’m a senior this year, but I remember being told as a freshman that the entire school would be participating in a Day of Service, where academic classes were cancelled for the day, allowing us students to engage in community service around Staten Island. I was confused and skeptical about the idea. I thought, “what group of high school students would voluntarily come to school just to do community service?” However I quickly found my answer: when I arrived at school on the Day of Service, the classrooms were filled as if it were a regular school day. 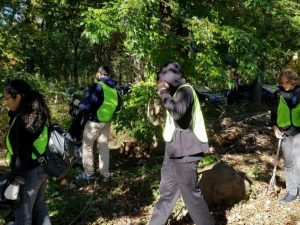 Daunte and his classmates cleaning up the Bluebelt

My group went to Tottenville, a Staten Island neighborhood I hadn’t been to many times, to “Tighten the Bluebelt.” We partnered with the Department of Sanitation to clean trash around a part of Staten Island’s Bluebelt stormwater management system. The day was filled with laughter, and we made several interesting discoveries while cleaning. Even though I may not see it everyday, knowing that my cleaning can help Staten Island’s ecosystem made me believe in my ability to change the world around me.

For three years, I heard Gaynor McCown students talk about John’s Pasta Party constantly. Seeing students with the event’s shirt on and posters around the school caught my eye, so in my Junior year I decided to see what it was about. Each year, the Pasta Party is held in honor of John Dressler, an exemplary young man who died from cancer while attending Villanova University. The proceeds from the party go to a scholarship in his name that helps students with cancer return to the classroom. Learning all this, I was instantly on board.

The plethora of jobs and roles that needed to be filled prior and during the day of the Pasta Party was astounding. However I knew the more orthodox jobs like serving would be popular, so to spice things up for myself and ensure every job was filled, I decided to attend the Pasta Party in costume as Mickey Mouse. I was extremely nervous, as being in costume isn’t something I do on my spare time, but I was equally as excited because how often will I get the opportunity to be Mickey Mouse?

When the day came and I was dressed for the occasion, seeing the look in the guest’s children’s eyes amazed me. They were convinced that I was Mickey Mouse and the pictures and children wanting to dance seemed to never end. After everything concluded, it struck me that everything I had done had helped make it possible for a student who wouldn’t have had the opportunity to further their education to do so.

All in all, my experiences during Day of Service and John’s Pasta Party showed me that though volunteer work and community service may not yield immediate results for me, the outcome of the work can change someone’s life.

Learning to Feel Safe »
« Leading the March
Back to top