Excerpted from a speech written by Jasmin Almonte, a senior at a NYC Outward Bound School in Washington Heights, for our 2019 gala

Twice a year, my school, WHEELS, has intensives, during which regular classes are suspended and students choose a single topic to focus on for a week. Last year, I studied Afro-Latinidad in my intensive. Afro-Latinidad, I learned, is a term used to describe the cultural identity of Latinx of full or partial African descent. I chose the Afro-Latinidad Intensive because race really interests me, and I wanted to learn more about myself and my background. I had always identified as Hispanic, but had never given much thought to my African roots. This intensive offered me an opportunity to really explore my own relationship to race, while also learning about the history of Afro-Latinidad in America. 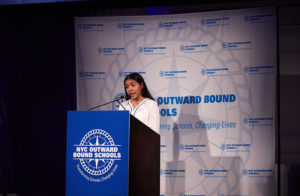 The first day of the intensive was the beginning of an uncomfortable but exciting journey. My teachers, Ms. Nieves and Mr. Morales, gave us a prompt to get us going: “Write about the first time you became aware of race.” Let me tell you, THAT was a really intense prompt, and when the other students in my class and I shared our responses, it became clear to me that in many ways, race really is just a social construct, something created by us, not nature. This theme stayed with me throughout the intensive.

During the intensive, we also learned about Langston Hughes, who wrote about Black America during the Harlem Renaissance, and later became a celebrated social justice hero.  But did you know that when he was a student his teacher told him he wasn’t going to amount to anything in the future. She said he wasn’t going to be successful because of his dark skin complexion.

As you can see I tapped into some very strong feelings during the intensive, and so did many others in my class!

We also visited the Schomburg Center for Research in Black Culture, a research library and archive for information on people of African descent worldwide.

An image that stood out to me in their historic photo gallery was one of a family of four who were not smiling for the photograph, they seemed upset, hurt, not in the mood, and angry at life. Reflecting on what I had been learning about the challenges for Black Americans, I could understand why they weren’t smiling: they were Black and were at a disadvantage. Just like Langston Hughes experienced when his teacher told him he’d never be anything, they were considered an “inferior race” and were always made to feel “less than.”

And their experiences as Black people were dismissed: so many people have been written out of history, and it’s places like the Schomburg Center that are trying to put them back. Even though this photo was about 150 years old, I felt connected to it because I knew many instances where my family, peers, and I were put down because of our appearance and race.

When the Intensive was over, I couldn’t stop thinking about everything I had learned. I didn’t just explore the history of my country, and my city: it was also my family’s history, and my community’s history. I wanted to learn more about myself and about where I come from.

So, I applied to go on WHEELS’ annual trip, which was headed to Peru to study Afro-Latinidad and the African Diaspora.

I was so thrilled to be accepted, and last spring, I was headed to Peru!

For months before the trip, the other students and I had weekly meetings with the chaperones to learn about Peruvian culture, the lifestyle, the community, their struggles, and history.

Our teachers also challenged us to come up with our own question to explore during our time in Peru. In case it isn’t clear yet, this was NOT a vacation! This was school, but with better weather.

The question I wanted to explore was: does racial discrimination against Black people exist in other countries, too?

My question was answered immediately when I arrived to Peru: I didn’t see any Black people in the capital, or any evidence of their roles and impact in Peru.

We had to go all the way to the city of Chincha, three hours away, where it seemed the Afro-Peruvian community had been relegated to finally meet some Afro-Peruvians, who shared a bit about what it means to be Black in Peru.

You might be wondering why I’m telling you about my intensive and the trip to Peru–and there’s so much about that trip that I’m leaving out! Well, remember what I said about NYC Outward Bound School’s educational approach? I think that my experience is an excellent example of demanding and engaging learning. My teachers pushed me with difficult texts, assignments, and writing prompts– this wasn’t easy stuff! But I completed these assignments not because it was mandatory to do the work, but because the topic was relevant to me and who I am.