Why is voting important? A Brooklyn Collaborative student shares her experience. 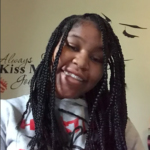 It will be another four years before Akeelah Hargett Baldwin can vote in her first election, but the importance of civic engagement isn’t lost on her.

This summer, the freshman at Brooklyn Collaborative Studies, a NYC Outward Bound School in Carroll Gardens, participated in YVote’s #2020VisionforChange program, a cross-partisan civic engagement workshop for NYC teens. Working virtually with high schoolers from around the city, Akeelah learned about barriers to voting, motivations for voting, and how electoral politics combined with activism can help increase voter engagement. She and her group developed a voting campaign centered around their assigned topic of racial justice.

Akeelah has long been passionate about racial justice issues, and says that after seeing the protests following the murder of George Floyd, she knew she wanted to become more active by helping to ensure that marginalized voices are heard.

“I know I want to go to college. I know that I want to become a TV producer and learn how to make documentaries,” she said. “I want to help uncover the truth.”

The YVote program culminated in a final virtual presentation, during which each group presented their voting campaign — centered around important issues from climate justice to gender equality — to the other students.

Akeelah’s group incorporated statistics on the voter suppression of minorities into their presentation along with action items on how to combat these issues. They also helped to educate their peers with a well-researched candidate “scorecard” for central Brooklyn’s Ninth Congressional District election. The scorecard compared each candidate’s stance on several issues including immigration, education and gun control.

“There’s a lot you have to pay attention to in order to be informed,” Akeelah said. Her best advice to young voters and soon-to-be voters is to learn about the important issues, do research, and have open, trusted conversations with others — just like in Crew.

“Crew is a safe space where you can always speak your mind,” Akeelah said. “Whatever was going on this year — the pandemic, the protests — we always spoke about it. Everyone had their opinions and spoke openly on it.”

Looking to the future, Akeelah says that she’s interested in learning more about politics and voter engagement in communities like her own. “The more voices we have, the more we will have the equality we’ve been fighting for.”

An Interdisciplinary Look at Environmental Justice Through a Creative, Collaborative Lens »
« Richard Stopol’s Forthcoming Retirement & the Search For Our Next CEO
Back to top