The following article was published in The New York Daily News on November 20, 2020 by reporter Michael Elsen-Rooney.

Since she was in fifth grade, Bronx teen Dayanara Sanchez has had her sights set on studying marine biology in college — enrolling in the city’s only maritime-focused high school and climbing to the top of her class. 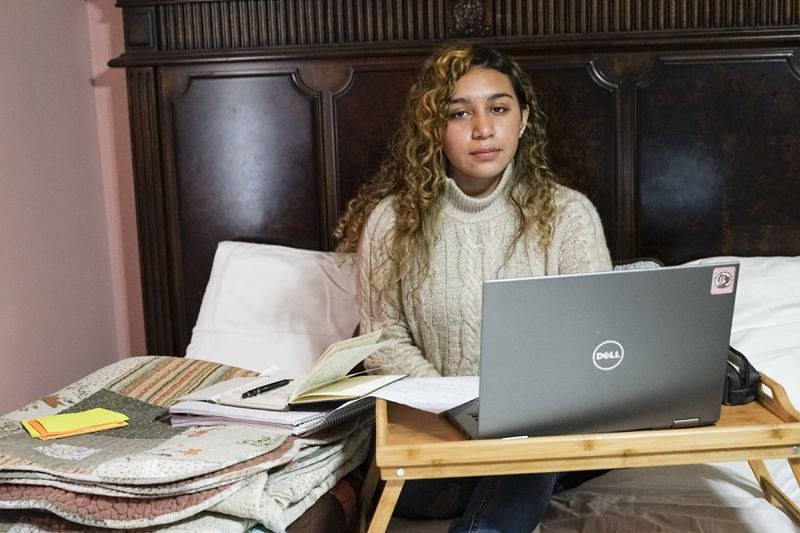 But now in her senior year of high school, instead of carefully working though college applications between classes like she’d planned, Dayanara is struggling just to carve out the time to finish them.

“I’m going to be completely honest… I’ve been like barely doing it,” said Dayanara, a senior at the Urban Assembly New York Harbor School on Governor’s Island, who’s been attending school several days a week through the city’s hybrid reopening plan, and will now stay home indefinitely after city schools shuttered Thursday. 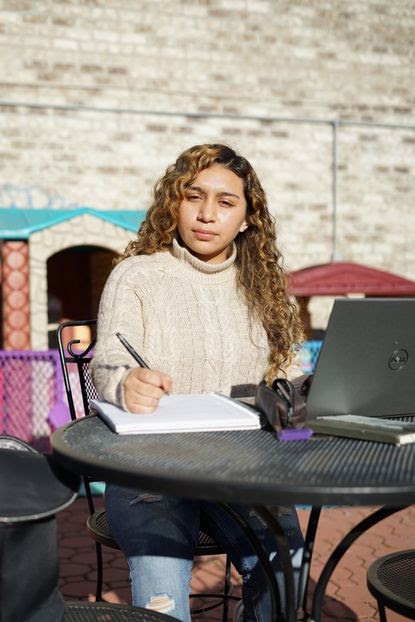 Dayanara Sanchez does her homework outside in the yard of her family’s apartment that doubles as a daycare, Wednesday, Nov. 18. (Gina Lachman/New York Daily News)

“I have regular schoolwork…my family runs a daycare in our own household, it’s pretty hectic trying to stay focused on what it is I need to do. Just the fact of hearing children, I’m used to literally the sound of the waves and the birds” at school, she added.

Dayanara, like high school seniors across the city and country, has seen her college application processes upended by the pandemic — faced suddenly with new and competing responsibilities, and cut off from the many of the in-person support from teachers and counselors she normally relies on.

Some educators worry they won’t be able to help college-bound teens stay on track.

“It’s a really tough time, I’ve never been challenged like this before,” said Jessica Cuevas, Dayanara’s college counselor at the New York Harbor School. “We’ve been bracing ourselves for the past couple months, and we’re thinking about the long-term effects.”

Early signs suggest there may be reason to worry.

As of late October, FAFSA applications for federal financial aid from city students — a necessary precursor to college for tens of thousands of teens — were down 10% compared to submissions by the same date last year, according to a Daily News analysis of data compiled by the National College Attainment Network.

Education Department officials say their own student-level data shows federal and state financial aid form submissions are actually up slightly in the month of October compared to last year.

FAFSA applications across the country were down 16% compared to last year, according to the network, with the greatest drops at schools with high shares of low-income students. 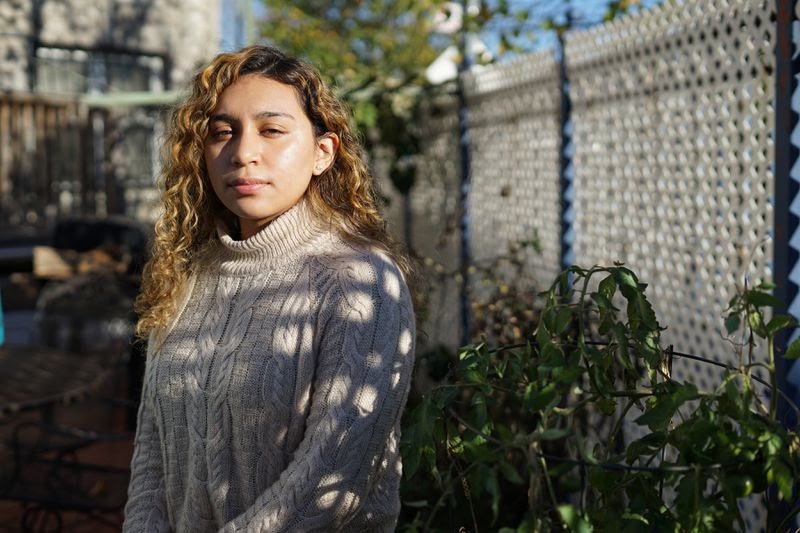 “Completing the college applications is slower” because of the delayed start to the school year, and the challenges of remote communication between counselors and students, said Jessica Sasko, the director of college supports at NYC Outward Bound Schools, which runs a network of city public schools.

CUNY, the most frequent college destination for city public school school students, declined to disclose the number of DOE applications received so far this year compared to previous years, noting the final deadline isn’t until February. Overall enrollment is down 5.1% across the public university system this year. SUNY officials said they didn’t have a breakdown of how many applications have come from city public school students.

Education Department spokeswoman Danielle Filson said the agency is pulling out all the stops to keep college dreams alive.

“We are offering personalized postsecondary support and have partnered with higher education partners to launch virtual application completion events, forums on the admissions processes and help with financial aid so that every student has a confirmed postsecondary plan before graduation and feels confident taking their next steps into the world,” Filson said.

For educators and students in the thick of the college process, the contrast between this year and others is stark.

Normally in early November, Cuevas’s classroom at the New York Harbor School is buzzing with anxious seniors seeking last-minute counsel and Cuevas is haranguing stragglers about turning in financial aid forms and working on their essays.

“It’s such a lively room. It’s where all the seniors came, it’s a hangout spot,” she said. “That’s been totally taken away from them.” 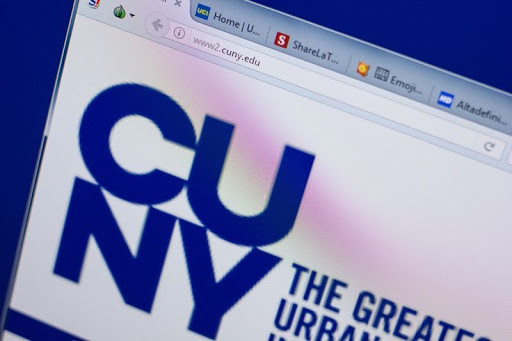 The loss of those “in-person moments that are impromptu moments” can be the difference between a student submitting a form on time and letting it slip, said Sasko.

“I find students are having a hard time getting their families to sit down with them,” she said. The final deadline for the financial forms is June, but submitting them early is often a sign the rest of the application is on track, educators say.

Like almost all aspects of remote learning, the challenges of mostly virtual college applications have fallen disproportionately on low-income families.

“One of the very hard things is catching students more likely to not navigate the college process on their own and if their families haven’t been through it,” Sasko explianed.

“We’re not ready at all,” he said. “It’s hard with only one counselor and seventy kids.” 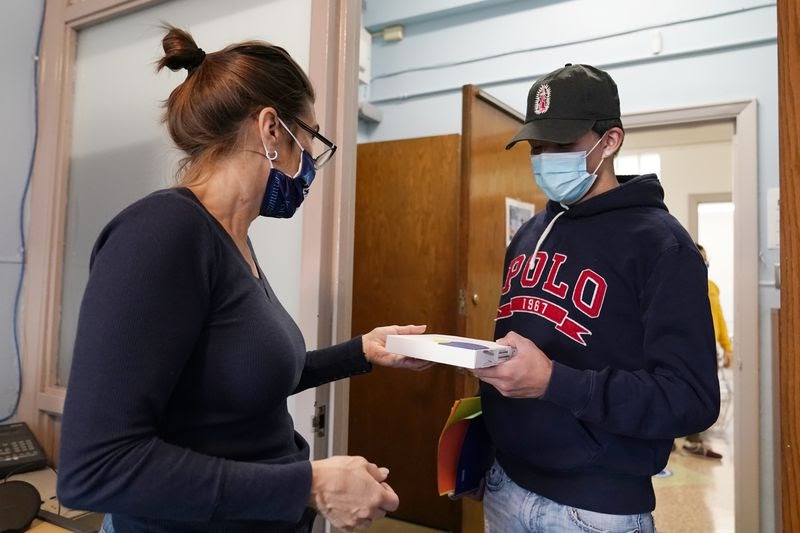 Some schools have lost critically-needed college advisers because of budget cuts. Two of the schools Sasko supervises had additional college coaches through NYU’s College Advising Corps, but the program lost city funding this year and the advisers’ jobs were cut.

But even if students had full access to counselors and teachers, some families may be hesitant to take on the financial burden of college during the economic crisis, counselors said.

“To add the college piece to it when you don’t know if you’re going to eat tomorrow, it’s tough,” said Cuevas. Moreover, FAFSA forms for federal student aid only take into account tax returns from two years prior, meaning students whose parents lost jobs during the pandemic won’t necessarily get higher aid offers.

Cuevas said she’s been struggling more than ever to figure out how much to push students towards college, knowing the real financial pain many are managing.

“I feel very torn morally about what I’m supposed to be doing,” she said. “If we’ve gotta table college for right now, I tell them it’s not going anywhere.”

Dayanara, the New York Harbor School senior, said she’s lucky to have financial support from her dad, but she’s also feeling the pull of chipping in to support her family.

“Over the summer I was full-time working in the daycare,” she said. “Now I try to stay in my room but I sometimes have to go out and help.”

Many days, the only time she can find to virtually meet with Cuevas and work on her college applications is around 7 or 8 p.m. when the kids from the daycare clear out and she’s finished with her other work.

“I have been really stressing and worrying about it a lot. Especially knowing I already missed some due dates… the other day I didn’t go to sleep until 6 am,” she said.

But Dayanara, who’s still dreaming of attending Florida International University next Fall, knows she can count on the support of her counselor and school — even if that support is fully remote for the time being.

“I’m lucky to have a small school, Jessica is such a great helper,” she said. “She’ll definitely reach out and help me, which is why I’ve been staying afloat.”