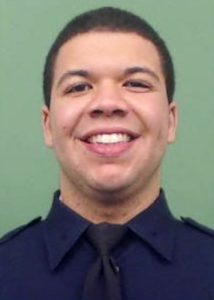 It is with great sadness that we share the news of NYPD officer Jason Rivera’s passing. Jason, a 2017 graduate of WHEELS, was killed in the line of duty on Friday evening.

The 22-year-old newlywed and Inwood native joined the NYPD in 2020 with a desire to help improve relations between police and the communities they serve. While at the Police Academy, Jason wrote a letter to his commanding officer about why he wanted to become a cop. The letter reads:

When I applied to become a police officer, I knew this was the career for me. I would be the first person in my family to become a police officer. Coming from an immigrant family, I will be the first to say that I am a member of the NYPD, the greatest police force in the world. Growing up in New York City, I realized how impactful my role as a police officer would be in this chaotic city of about 10 million people. I know that some things so small as helping a tourist with directions, or helping a couple resolve an issue will put a smile on someone’s face. 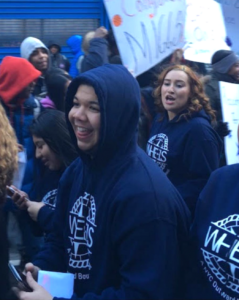 “Jason had a huge, warm smile and a personality to match, and he was one of the most earnest students I have come across,” said Tom Rochowicz, principal of WHEELS. “A few publications are sharing this letter he wrote when joining the academy, and it is incredibly him. I went back last night to look at this personal statement, and in it he talks about family, hard work, and gratitude with such authenticity. That was also him.”

While at WHEELS, Jason was part of a team of students who helped the school earn a $5,000 grant for the Safe Passage Project, a nonprofit that provides free legal help to refugees and immigrant children in NYC who face deportation. Along with several peers, Jason pushed for more diversity in WHEELS staff recruitment and hiring. He also participated in the 12th grade mentoring program and was the head manager of the school’s basketball team. The year he graduated, Jason shared a video message with WHEELS freshmen titled, “Do you want to succeed as bad as you want to breathe?” asking them to stay motivated and put in the work. He went on to attend Lehman College before joining the NYPD.

We extend our deepest condolences to Jason’s widow, family and fellow officers in light of this tragedy. The NYPD shared that a wake for Jason Rivera will be held from 1-8 p.m. at St. Patrick’s Cathedral on Thursday, Jan. 27, followed by funeral services at 9 a.m. on Friday, Jan. 28.